After a hectic day full of new faces, new discoveries of science and culture, it was a wise choice when Doctor Chapman recommended us to take a walk to the nearby village to see first-hand what a subsistence farmer really does. We had learned about the daily life of a small-holder fisherman by visiting the fish landing and through our conversation with Matebe, so now seeing what constitutes the majority of labour in the country should be as if not more eye-opening.

Our 30 minute walk past the vicinity of the lake hit us with all the heat that was shielded in the presence of Lake Nabugabo. We met up with Matovu, who works alongside Dr. Chapman with the McGill Lake Nabugabo Research Project, who began a thorough look at subsistence farming, best described as working for the high hanging fruit.

Matovu immigrated to Uganda after losing both his parents in Tanzania, living with a British missionary in the Nabugabo area. He valued the importance of having a physical place to call home, so purchased a piece of land which today stands as the home for him and his family. He brought us around to explain the various crops he nurtured: coffee plants and orange/lemons, as donated by the Bugandan Kingdom, on top of pumpkins, guava, maize, matoke, and plantain… the range of agriculture ran the whole gamut. What hit us what was every farmer decided what to plant independently of his or her neighbours, in essence crop choice was driven by personal preferences rather than economies of scale. The idea to be self-sustaining through one’s own crops far outweighed the idea of market-making. 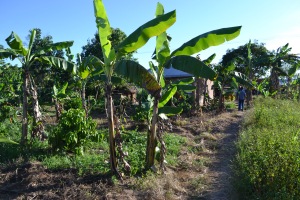 As an economics student, this would shatter your notion of efficient markets but when you add culture into the equation it brought out the very root of why this is the dominant sector in most of Africa. With family at the core of the nucleus, a home with all the necessary crops and tools to provide for one’s family trumps the economics of trading away these assets to a larger force or market. While excess crops are sold off, the majority of what is planted is consumed by their own family. The big question mark is what occurs when climate change changes that equation, by knocking at the assumed certainty of having regular food grown in one’s yard?

That question stood out for the rest of the day as the team got to meet women who hand-weaved mats and baskets out of the straws and excess of the grain products. Everything goes back to family, providing for one’s family and for the little ways one can do a little more to improve the state of the home. With most of poverty rooted in agriculture, the greatest question that could be asked if how to improve the livelihoods of the rural population while keeping culture intact?

I think the answer should be saved for later. After that question stuck in my head for the remainder of the day, going into the next morning, I was about to see what the consequences could be if one ignored that culture at the centre of development. The team took off onto Lake Nabugabo in the early morning to collect water samples in different areas of the lake, including in the wetlands, deeper into the lake and in algae-heavier areas. Upon return we had an eerie look at one of the fastest growing technologies in the area, one that could have tremendous impact on the locals of the area.

The premise behind cage culture is to implement a better controlled environment that still shares the properties of a water body by creating a “cage”, a large square net that keeps fish in a smaller area using more controlled feeds to facilitate their growth and reproduction. The one cage we visited was the result of a research grant to test its viability, and if successful could fill the entire lake with more cages, eventually taking away all the fish from local fishermen. It was a sentinel of a potential future that could change the entire ecosystem of the area, humans and fish inclusive. The idea has been implemented in Lake Victoria with locals having to switch to post-fishing roles that often are under the discretion of a larger corporation or entity.

The duality between the subsistence farmer and the corporate cage culture was jarring. On one end, subsistence farming was rooted in culture while lacking a real structure or market underlying its potential profit making. On the other hand was an efficient cage culture technology that could quickly increase production and actual fishing capacity while making the work and livelihoods of fishermen irrelevant.

The rest of the day really begged the question of how one can influence the global health systems of an area without destroying its identity. How does one create a win-win scenario where the identity of a family and the full potential of their farm’s capacity come together to truly improve livelihood? As we approach the final days of our mission to build a foundation to address those very issues, it all seems to be coming together as we glanced at the beauty of a lake which soon could be truly transformed.