Today, on the calm waters of Lake Naivasha, we met a fisherman named Fredrick. Fredrick grew up in a village within the Lake’s catchment and learned how to fish from his grandfather. In a time without motor-power, Fredrick’s grandfather and his contemporaries would use oars to make their way through their fishing routes. A day’s hard work was rewarded with a sizable catch according to Fredrick’s grandfather. However, Fredrick, despite his motor-powered boat, felt that it had become more difficult to catch the types and amount of fish that were caught in the days his grandfather describes. There seemed to be a deep familial tie, and so we asked if Fredrick planned to keep the fishermen’s legacy alive with his grandsons. The pause before his response was heavy and his words were remembered as: “I want my grandsons to go to school, if it doesn’t work with school the next choice would be teaching them how to become fishermen.” We couldn’t help but wonder if Fredrick’s grandfather may have replied in the same way. Is life as a fisherman more difficult than it was a few generations ago? Or did his grandfather simply embellish the truth as many grandfathers do? Has life as a fisherman changed, or simply the hopes and dreams of the new generation? 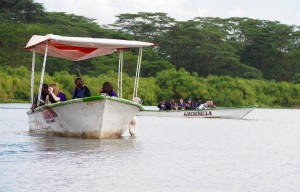