As we were ushered in through the gates of “hell”, we were astonished to see the abundance of wildlife roaming freely and the beautiful escarpments that lined the perimeter of Hells Gate National Park. We began to question its devilish name, as the park seemed more heavenly, contrary to its title. 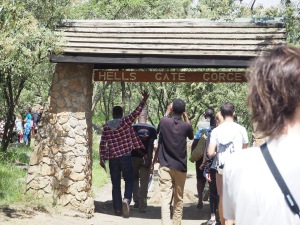 However, the deeper we ventured into the park’s interior, the more its dark nature was slowly revealed. Plumes of steam could be seen scattered on the hillsides coupled with a piercing sound that radiated throughout the park. Although the most notable sign of human interference was the network of pipelines cutting across the landscape. Currently, Kenya is experiencing an energy crisis and geothermal energy has been proposed as the solution to solve this shortage. In Hells Gate National Park, the construction of a large geothermal facility has sparked great controversy. The essence of the problem is the need to develop in order to provide for the citizens, yet not to the extent that you destroy the livelihoods of the people who rely on the landscape. It is clear their needs to be some balance between these two aspects, but the question is how to balance them?