Naivasha, Kenya is home to a massive floriculture industry – where traditional agricultural practices, and the healthy foods they bring, were rapidly replaced to make room for large-scale agriculture.

Community members long for the return of benefits that come with small-scale agriculture (like the ”kitchen garden”), where they can not only feed their families, but create a new source of revenue by selling the food they don’t consume.

LNDEG is a group with the core vision of empowering people with disabilities. As stated by a group representative: “disability is not inability and what we need is empathy not sympathy”.

The GHS-A students worked side-by-side with the LNDEG to design and implement a kitchen garden. This is not the typical garden you would find in Naivasha. Instead of planting the same old vegetables you see everywhere, the students and the LNDEG decided on planting indigenous vegetable species including, Cowpeas, Black Night Shade, Coriander, Spider Plant, Jews Mallow, Crotalaria, Spinach and Kales. These vegetables are in demand in the communities but are hard to find, making them highly marketable as well as resilient to local climatic conditions. LNDEG plans to expand their business by not only selling vegetables by selling the indigenous seeds after harvest as additional means to increase income.

Western, the GHS-A students and LNDEG will connect with an international non-governmental organization called Slow Food, who has an initiative called 10,000 Gardens in Africa who will train the LNDEG to become a part of a network of leaders aware of the value of their land and culture, who can serve as protagonists for change and guide the continent’s future. 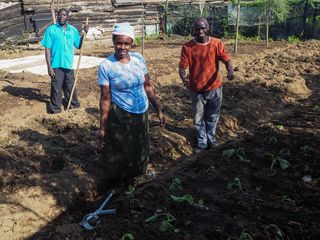