We embarked on our ten-hour journey from Jinja to Kibale before the Sun rose and we covered roughly half the width of Uganda along the way. After driving past hours of lush mountainsides and banana orchards, we arrived in the jungle that is Kibale National Park. This area of the world has the highest biomass of primates and over 100 species of birds, and they all coexist with the scientists and park staff that live and study here year-round. Animals roam freely through the park, seemingly undisturbed by the proximity of humans, and shows that we can live in harmony with the environment if we aim to leave it untouched. This contrasts greatly with the tourist trap zoo that we visited along the Nile yesterday, where scared monkeys and tortured crocodiles were poked and prodded for the amusement of the foreigners. While that situation was heartbreaking, it was reassuring to see today that there are people who care about the animals and their safety, and that it is possible to live in harmony in the jungle and its inhabitants. 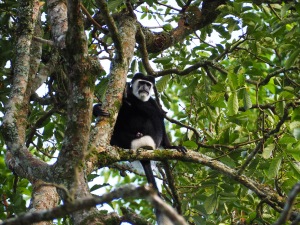